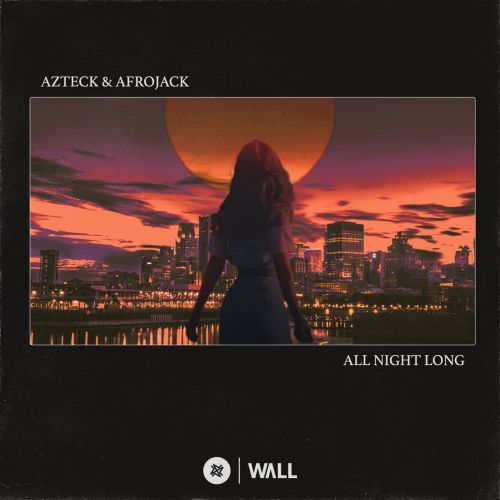 Azteck (Ki Fitzgerald) and Afrojack (Nick van de Wall) are going “All Night Long” with this next release!Adeep dance track that will be released on Wall Recordings.

The two are no strangers to one another. Having already worked together last year on the hit track “Speechless”, Azteck and Afrojack are no strangers. 'All Night Long' sets a mysterious mood with the deep bass vibe and emotive, loving lyrics. Azteck and Afrojack have been waiting for the right time to release this dance floor burner, but with the world finally opening up again, now is the perfect time.

Azteck had one of his most productive years last year and he is continuing to establish himself as a force to be reckoned with this year. He has contributed writing and producing forbig names in the EDM worldsuch as Armin van Buuren, Hardwell, Tiësto, Don Diablo, and Wiz Khalifa to sum up a few. He decided in 2020 that it is going to be his time to shine. Dropping his debut singlein the form of “endlessly”, a collaboration with AVIAN GRAYS on Armada Music. And he closed out 2020 with the anthem 'Do It' alongside DJs Dimitri Vegas & Like Mike and Mexican singer and influencer Kimberly Loaiza. Not so long ago he dropped another title with the two Belgian brothers and Angemi called “We’ll be Dancing Soon”,which even got selected by Coca-Cola to be part of a European Campaign.Azteck’s early steps as an artist are making a huge impact. He is one to watch!

Afrojack and I made this record throughout lockdown, which has been a tough time for everyone.In the madness,we had this little idea that we kept coming back to time and time again until the idea grew into a full song. - Azteck

Afrojack needs no introduction. In recent years the phenom Dutch musician has been placed on the Forbes ‘30 Under 30’, while also being named one of the 50 Most Important People in EDM by Rolling Stone. His last big release, together with David Guetta, is a huge success and has gotten close to 25 million streams on Spotify. His achievements are nothing short of breathtaking. Nowadays he is still focused on his music and continues to give everything he has. Pushing music in bold new directions,andat the same time,he is putting a lot of effort into his label Wall Recordings. Trying to give up and coming artistsa chance to make it big.Believing in new talent is what he stands for and showing them that the music industry is always within reach if you have heart for it. 'All Night Long' is a great deep dance track that, when the clubs and festivals open again, will fill dancefloors worldwide. It fits the club scene very well and is overall a track to dance to.