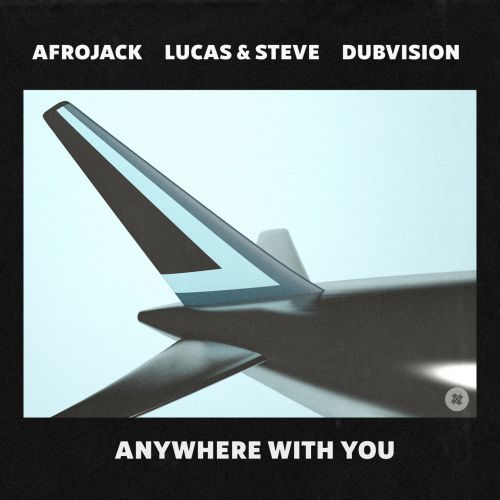 Let’s go! The new dance track 'Anywhere With You' invites you to get up and dance, travel or to have fun with your friends and loved ones. After listening to the demo, with only the voice of Tonino Speciale, also known as Taranteeno, and piano music, Afrojack immediately felt the ‘Tomorrowland feeling’. He invited DubVision to add their signature epic sound, and Lucas & Steve for the sweet guitars and a fresh coat of organic polish. This feelgood anthem celebrates that the world is opening up, and is released on Wall Recordings on 30th September at 5pm CET.

Afrojack and DubVision worked together on the tracks “Back to Life” and “New Memories” which both were a great success. ‘Anywhere With You’ marks the first

collaboration between Afrojack and Lucas & Steve, and is destined to be a true festival hit as these five amazing talents join musical forces. Ideal for events like Tomorrowland in both its melodies and enormity, the new single is all about dancing and having fun with your friends and loved ones, wherever you are: ‘Anywhere With You’.

“When I heard the demo I knew ‘this is going to be it’, and with Lucas & Steve and DubVision we made this song epic. It’s an honor for me to collaborate with these artists on this happy and positive song, and I can’t wait to see the reactions of the fans” - Afrojack.

“When we got the demo from Nick, we instantly knew what to do with the arrangement. We love the uplifting summer feeling, and with Lucas and Steves touch the record became a next level feel good banger! We can’t wait to play this one live and see the crowd’s reaction!” -Dubvision

About Afrojack
Afrojack has little introduction needed at this point. In recent years Afrojack has been placed on the Forbes ‘30 Under 30’, while also being named one of the 50 Most Important People in EDM by Rolling Stone. He has worked with David Guetta which is a huge success. His achievements are nothing short of breathtaking. Nowadays he is still focused on his music and continues to give everything he got. Pushing music in bold new directions. At the same time, he is putting a lot of effort into his label Wall Recordings. Trying to give up and coming artists a chance to make it big. Believing in new talent is what he stands for and showing them that the music industry is always within reach if you have the heart for it.

About Lucas & Steve
Dutch powerhouse duo Lucas & Steve have seen a momentous rise to stardom in recent years with consecutive summer hits, multiple platinum and golden records, an endless string of international performances and accolades from BUMA (The Netherlands), Fun Radio (France), DJ Mag, MTV and many more. The pair are renowned for uplifting productions and emotive lyrics, scoring massive radio success with "Summer On You", "Up Till Dawn", "Where Have You Gone", “Perfect” and of course “Letters”. As the world came to a standstill in 2020, they continued to elevate their writing and recording process to new heights and surpassed 1 billion streams from all corners of the globe. Now loaded with an endless rush of inspiration and motivation for 2021, Lucas & Steve have locked in an incredible line-up of collaborations and solo releases, paving the way for what is set to be their most significant year so far.

About DubVision
Dutch brothers Victor and Stephan Leicher worked as DubVision with world known DJ’s as Hardwell, David Guetta and Tiësto. With seventeen Beatport Overall Chart Top 10s, five Beatport Progressive House Chart #1s and a Beatport Electro Chart #1 to their name and over 50 million YouTube, SoundCloud and Spotify plays, they have marked themselves out as a serious force in EDM. With more than 200.000 daily plays and over 3.2 Million monthly listeners all over the world on Spotify only you can say their music is high tier and loved worldwide and with their strong social media game they have gained fans all over the world.