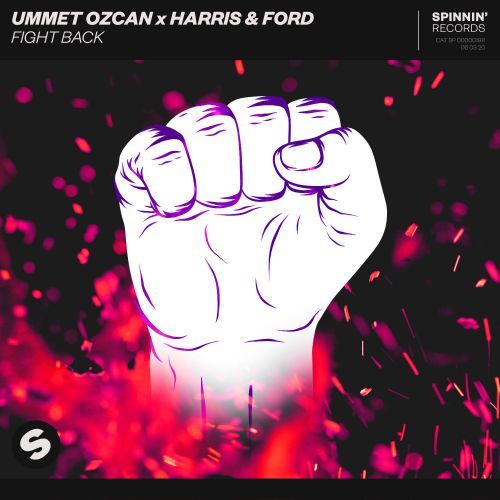 Ummet Ozcan is back, teaming up with Austrian duo Harris & Ford for the powerful future bounce track ‘Fight Back’. This track sees him present lush vocal melodies before unleashing a sophisticated bassline, bursting of heavy beats, freaky synth chords and twisting sound effects. ‘Fight Back’ is a true DJ's favorite and shows Ozcan’s trademark productional wizardry - out now on Spinnin' Records.

Both acts are renowned for dropping refined dance gems, filled with infectious rhythms and strong melodic hooks, and ‘Fight Back’ is the perfect blend of their distinct sounds. It’s an upbeat vibe, best expressed in the track’s chorus, a singalong vocal line that seems made to turn up every crowd. Innovative stuff, already picked up by several tastemakers, receiving support from none other than Hardwell, Dimitri Vegas & Like Mike and R3HAB – and bound for more DJ and radio support as it’s officially out now.

“Catchy AF, it was great to work with Harris & Ford on this one! Stand tall y’all” – Ummet Ozcan

"’Fight Back’ is a track with a clear message, catchy vocals and a melody that gets stuck in your head.” – Harris & Ford

Ummet Ozcan
In an age where very few artists break the mold and truly shine through as unique and innovative, Dutch/Turkish star Ummet Ozcan is one of the exceptions to the rule. Not only because of his advanced studio knowledge and the impressive string of dance floor hits this resulted in, it’s also thanks to his enduring presence at worldwide mainstages these last years.

It’s no surprise that he’s an in-demand talent who’s playing to an international market with gigs at world-renowned clubs and festivals like EDC, Tomorrowland, Creamfields and Global Gathering.

Despite his skyrocketing fame, the all-star headliner stays humble and focused, “I don’t care for the fame, I care more about the hard work that goes into music making. I started making music because it was my passion and my hobby.”

Harris & Ford
Everything started in 2011. Nights were turned into days, constantly working on the first songs in their basement studio, tweaking them to perfection. Attached to the wall:  an iconic „Indiana Jones“ movie poster - "Starring Harrison Ford" - written in large letters. A quite creative name idea and 9 years later, "Harris & Ford" can show over 150 million streams, dozens of chart hits and countless gigs all over Europe place them among the internationally most successful Austrian DJs and producers.

With over 1.5 million monthly listeners, Harris & Ford are currently one of the most successful Austrian artists on Spotify. As producers and songwriters, the two Viennese regularly work with the EDM elite, most recently with Scooter, Da Tweekaz, Jebroer and VINAI. H&F productions have also been supported by acts such as Hardwell, Dimitri Vegas & Like Mike, W&W, R3hab, Ummet Ozcan and many more.