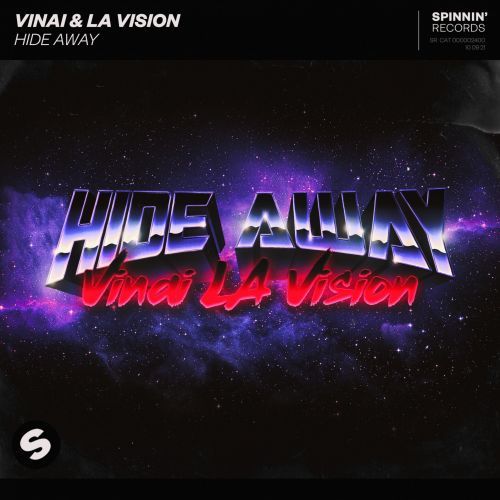 Italy’s powerhouse duo VINAI teams up with the rising production talents of the half Italian, half Brazilian LA Vision. Titled ‘Hide Away’, the new joint release is a tender and emotive club hit, built from the ground up with contemplative vocals and VINAI’s signature big room bounce style. A certifiable secret weapon for DJs around the world, ‘Hide Away’ is guaranteed to bring fans out of the woodwork with its synthetic vocal harmonies and thick, rolling baselines - out now on Spinnin’ Records.

VINAI is making impressive moves once again. After returning to Spinnin' Records last year with the smash hit 'Rise Up' (recently passing the 100 million streams milestone), the Italian stallions continued to deliver hot stuff with 'On N On' and the Afrojack featured 'Up All Night'. Going strong since entering the scene in 2011 with a string of big room festival hits, the duo continues to evolve their sound, maintaining a bass heavy and melodic approach while incorporating polished vocals and alluring, pop-styled arrangements.

Marco Sissa aka LA Vision is the new kid on the block, making a huge entry last year with debut single ‘Hollywood’, a teamup with dance music mainstay Gigi D’Agostino. The record made instant waves among clubbers worldwide, becoming an immediate claim to fame for the burgeoning Brazilian/Italian producer, as it steadily closes in on the 100 million Spotify streams. With his sound covering both sensual pop as anthemic dance music (just check out his remix of Alok & Timmy Trumpet’s ‘Underwater Love’ for a taste), LA Vision is acknowledged as one of today’s hottest emerging acts.

‘Hide Away’ is what happens when these two acts join forces - a rare collaboration that is truly greater than the sum of its parts. Powering up with a stream of pulsating bass chords, the pitched vocals bring a melancholic vibe that continues as the chorus breaks out. Cool layered beats appear as the energetic backing to a bittersweet song, highlighted by a strong, singalong vocal chant, ready to get all hands waving in the air.

Consider them tastemakers in the pop/dance crossover genre, VINAI and LA Vision deliver an upwinding tune in every aspect. Whether it’s the elements of classic house and eurodance combined with a fresh, contemporary production, or the teamup between a veteran act and a new, upcoming artist, ‘Hide Away’ has all of the makings of a timeless dance pearl. Better join this party, cause it’s about to start!

"'Hide Away'-- it's the true hybrid between a slappy EDN song and Euro dance anthem. It's something pretty unique that we totally love!" - VINAI