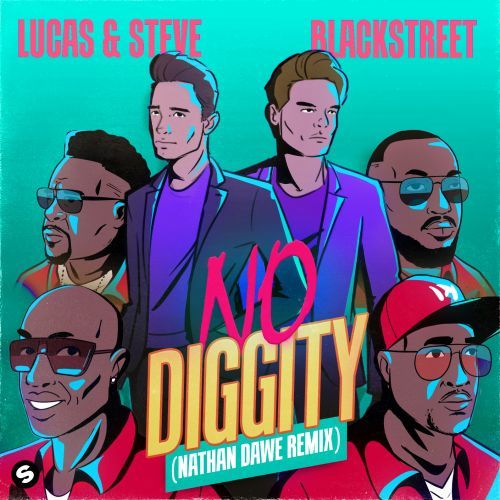 After DJ/producer duo Lucas & Steve recently released a brand new, highly successful cut of Blackstreet’s ‘No Diggity’, without a doubt one of the biggest songs from the 90’s, the record is now back again in a fresh remix by Nathan Dawe. This phenomenon from the UK house scene has taken the track further onto the dancefloor, dropping some serious grooves and club vibes alongside the original’s re-recorded R&B vocals. Catch a fresh wave of this classic tune, out now on Spinnin’ Records. Back in ’96, the hip hop infused ‘No Diggity’ by US act Blackstreet already turned into a smash hit. With a featuring of none other than Dr. Dre, the record reached Billboard’s #1, leading to a Grammy for Best R&B Performance in ’98 as well as giving the accompanying album Another Level wings towards four times US platinum. Safe to say, Blackstreet has never left the public eye since then, as ’No Diggity’ remained an indestructible song throughout the years. Countless artists like Prince, Ed Sheeran and Darius Ruckers have covered the track, while it’s appeared on many occasions, from Super Bowl and Winter Olympic commercials to a teamup with Aloe Blacc at Jimmy Kimmel Live. Famed dance music act Lucas & Steve (recently hitting the 1 billion streams milestone) followed earlier this year, releasing a completely new makeover of ‘No Diggity’ to widespread acclaim. The guys didn’t simply cover the original, but teamed up with Blackstreet for a brand new version. The record still builds its timeless sound on the melody and vocal approach, but receives an additional gust of energy thanks to a series of upwinding piano chords, tasty house rhythms, cool bass sounds in the lower regions and sweet electronic effects. All was done with the approval and cooperation of the original artists. Blackstreet’s Chauncey was full of support and excitement: “Lucas & Steve are huge and they are great artists. This record is massive and is going to be a great launch for them. At first, I believe all of us wouldn’t have imagined this. But it really has turned into something great. How amazing the record sounds with the touches on us redoing our vocals, it’s just incredible. I love the guys and I wish them all the success with ‘No Diggity’.” Sure enough, Lucas & Steve’s brand new version turned into an incredible hit, counting over 10 million Spotify streams by now, ….. Nathan Dawe remix Such a grand tune couldn’t go without a proper remix. And who’s better for the job than Nathan Dawe, rising star from the UK house scene. The Birmingham DJ/producer has been dropping serious dancefloor bombs these last years, delivering a contemporary take on UK garage, club house and 2-step. Surely, 2019 hit ‘Flowers’ was his claim to fame, bringing a fresh twist on the UK garage classic, but last year Dawe kept evolving with rhythmic house grooves ‘Lighter’ and ‘No Time For Tears’, this year followed up by the 2-step beats of ‘Way Too Long’ - each racking up tens of millions of streams. So, the right man at the right place to remix ‘No Diggity’ into dancefloor bliss. Nathan Dawe honors the Lucas & Steve tune by maintaining the original’s vocals and melody, but takes the record straight into the club with some moody piano chords, rhythmic bass sounds and a steady beat. Quickly working the tune towards the chorus, the record is enhanced by subtle sound and vocal effects, brisk chord progressions and a more uptempo groove. The result is a record that’s even better suited as a DJ weapon. The hooks are there, as well as the inviting vocals, while the beat and rhythm make sure you’ll never stop partying to this timeless tune - ’No Diggity’ is here to stay.