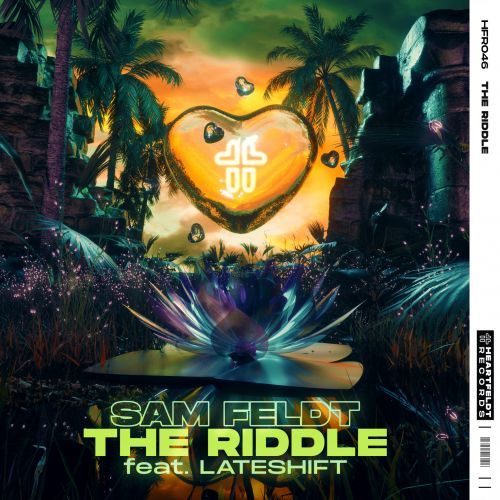 Dripping with sunshine vibes and oozing the kind of summer heat that should see it populating the world’s biggest playlists, ‘The Riddle’ is Sam Feldt in his absolute element. Rising, syncopated piano progressions, padded percussion and undulating grooves open up into hands-in-the-air inducing vocal sections courtesy of Lateshift.

"After connecting with Lateshift (Danny & Dom) during the first Heartfeldt writing camp in Scotland back in October 2019, we stayed in touch and continued to work on songs together," Sam Feldt said. "'The Riddle' is the first one we are now premiering with the world, and I am super happy with the result. I feel like 'The Riddle' is a quintessential Sam Feldt hit, with strong melodies and uplifting vibes all around. I can't wait to hear what my fans think of it!"

Sam Feldt is having a huge 2021. World-renowned for his ability to craft house music cuts that dominate global charts - his rework of Robin S’ ‘Show Me Love’ hit #4 on the UK charts, while 'Post Malone' ft RANI has over 420 million streams on Spotify alone - the talented producer is now increasingly courted by pop music’s A-list. He kicked off the year with his Kesha collab ‘Stronger’, followed last month by the Sam Fischer feature ‘Pick Me Up’, which passed the 10 million streams mark in only its first month.

Sam Feldt’s live shows have taken over the stages of the world’s biggest festivals and clubs, including Tomorrowland, Ultra, Creamfields and Coachella, as well as his infamous, international Heartfeldt Pool Parties. His Heartfeldt Records label continues to provide a platform for up-and-coming talent, his charitable project Heartfeldt Foundation works toward a more social and sustainable dance music industry, and his entrepreneurial platform Fangage recently closed out its first round of investment at $2.5million.

With over 2 billion streams between them, Lateshift is better known to music fans as Danny Shah and Dom Lyttle. The multi-platinum, award-winning artists have collectively worked with and written for Kylie Minogue, The Vamps, David Guetta, Sigala, HRVY, Ed Sheeran, Rita Ora, Kesha, Imanbek, Anne-Marie and Ella Henderson. Shah co-wrote the UK’s 2021 Eurovision entry ‘Embers’ for James Newman while Lyttle previously partnered with Sam Feldt on his 2019 hit ‘Post Malone’. Their collaboration with HRVY, ‘One Day, Two Nights’ clocked up over 1 million streams in its first two weeks.

A feel-good smash that works just as well in the car with the top down as it does on the dance floor, when the world needs a dose of the good stuff Sam Feldt and Lateshift are right there to oblige with ‘The Riddle’.