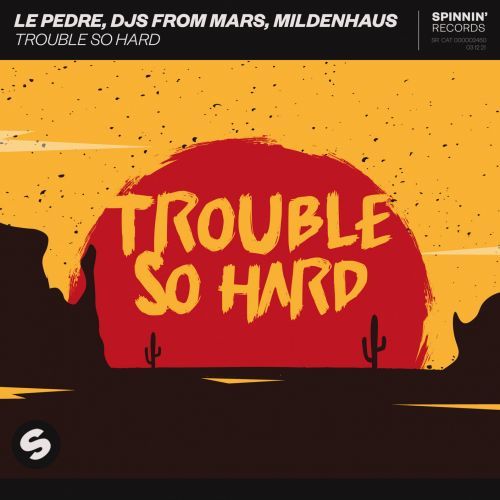 Le Pedre, DJs From Mars, Mildenhaus give you ’Trouble So Hard’

If these times ever needed a proper anthem, it’s finally here. Delivered by French DJ/producer Le Pedre and Italian tastemakers DJs From Mars and Mildenhaus, the new single is a rejuvenated take on Vera Hall’s 1937 single ‘Trouble So Hard’, a raw vocal tune that resurfaced in the late 90’s thanks to hitmaker Moby. Borrowing the name of its originator, the newest rendition  builds sentiment with the world famous vocal, all while adding steady house beats, sweet piano chords and searing guitar licks - fabricating a heartfelt and instant classic all over again, out now on Spinnin’ Records.

Le Pedre is here to rock, so much is clear, as the French talent made it his goal to bring a more guitar driven sound into the electro world. By pairing his bass-infused house sound with guitars and an accompaniment of other live instruments, Le Pedre’s found massive success in hits like ‘I Was Made’ (together with VINAI) and the 2021 favorite ‘Gimme Gimme Gimme (A Man After Midnight)’.

Having drawn inspiration from both Kiss and ABBA for the aforementioned hits, Le Pedre now digs even deeper into his catalogue of revered vocals, working his magic on Vera Hall’s iconic blues tune ‘Trouble So Hard’. The new release captures the tender essence of its predecessor, but garnishes the track’s enchanting vocals with swelling baselines, uplifting piano chords and, of course, Le Pedre’s trademarked guitar licks.

‘Trouble So Hard’ wouldn’t be the single that it is without the collaboration of Italian luminaries DJs From Mars, the masked duo renowned for their mashups of electronic and rock, and Mildenhaus, an up-and-coming talent who shares that same penchant for dazzling guitar-laden grooves.

‘Trouble So Hard’ sees Le Pedre, DJs From Mars, and Mildenhouse come together as an electro-rock dream team, delivering a poignant anthem for these surreal times. It’s a hopeful message, though, as ’Trouble So Hard’ insists that as long as we keep on rocking and dancing, we’ll get there in the end— Fists in the air and smiles on our faces.