Legendary Dutch dance act Chocolate Puma launched its very own record label Tonco Tone this week. The guys kicked things off with the aptly titled debut release 'Megablast', a raw and sweaty piece of tech house. We had a short talk with them about the label, the record and what to expect.

You could say it's a journey through house, as Chocolate Puma's popular live events are named. With the genre appearing in so many guises these days, René and Gaston are interested in showcasing how diverse house music can be, from warm club sounds to raw, techno styled grooves.

How did you get the idea of starting your own record label?
"We wanted to be able to share our experience and knowledge we've built up throughout the years on both producing and performing. Besides sharing this knowledge we've also always felt really inspired by working with talent, so starting this new platform feels to be the next logical step for us.”

What can we expect from Tonco Tone?
"Dance music is such a diverse and always evolving music genre. We've been around long enough to enjoy many variations, and also hear this from other DJ's we're performing with. Our own event A Journey Through House, which we organize every year at ADE, is also a good example of that. We always ask the performing artists to play stuff outside their regular sets - to step out their comfort zone. This has resulted in many surprising performances, and we kinda wanted to do the same with a record label; ask producers to do something out of the ordinary. Tonco Tone should be the place where you hear music you never heard before." 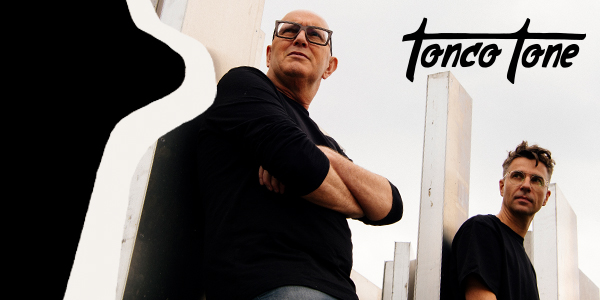 What kind of music should we be thinking of then?
"Well, that's the thing, it could be anything. Of course, it's house music, but it should be something extraordinary. We also have it with our own productions; sometimes we make something that sounds great, but after a while it simply remains to be 'a nice tune'. It misses something; a divergent sound, a raw edge... That's what we also expect from the artists releasing on Tonco Tone, to bring that little bit extra that makes a record special."

Will you be doing the A&R for this label yourselves?
"Definitely! We've heard lots of music in our careers, so it's difficult to surprise us -we're very critical A&R's haha! We want to be blown away by something original, and then share this with the rest of the world."

The debut release on Tonco Tone is your own production 'Megablast'. What can you tell us about that record?
"Well, it feels like the perfect start of a label, a big bang haha! It's also what we usually do during live shows, kick things off with a banger - so everybody immediately knows we're there! It also underlines that everything is possible at this label, we're not afraid to drop a raw piece of tech house. Stay tuned for more Tonco Tone surprises soon!"

5 FEMALE ARTISTS TO LOOK OUT FOR ON INTERNATIONAL WOMEN'S DAY